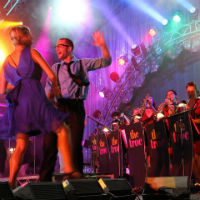 Kris Stewart has worked widely, both as a freelance theatre director and as an artistic director.

As a director, Kris has directed 50+ productions for companies such as Opera Australia, the Sydney Festival, the State Opera of South Australia, Melbourne Theatre Company, Sydney Theatre Company, The Broward Stage (Miami), International Management Group, Ten Days on the Island, The Jacobsen Group, The Gateway Playhouse (New Jersey) and The Production Company.

Largely focussing on new music theatre, Kris’ work has been recognized with the $100,000 Jujamcyn Theaters Prize, the Sir Keith Murdoch Prize for Leadership and Innovation and a Churchill Fellowship. Kris is an alumnus of the Lincoln Center Theatre’s Director’s Lab and completed his post-graduate study at the West Australian Academy of Performing Arts.