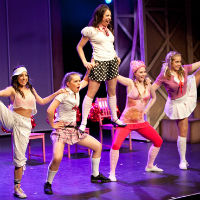 Dean Bryant and Mathew Frank’s Virgins was originally titled The Virgin Wars and was commissioned by the Next Wave Festival in Melbourne, following on from the success of Prodigal Son the previous year.

Matt and Dean eventually expanded this one act musical into a full evening that was nominated for a number of Green Room Awards before playing at NYMF 2006. You can find out information on that at Dean Bryant and Mathew Frank’s website, BryantAndFrank.com.

Kris has been lucky enough to direct it twice. Most recently was in September 2010 with students from the Australian Institute of Music in Sydney, as part of a program focusing on Australian musicals. Before that, he directed the original production as part of Next Wave.