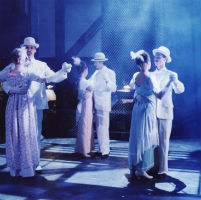 Kris Stewart completed his directing studies at the West Australian Academy of Performing Arts, with two key productions – Rags and Three Guys Naked from the Waist Down.

Three Guys Naked is very endearing, but is rarely produced as it is certainly a product of the period in which it was written, and it is a great challenge to write a show about stand-up comedians and make it as funny as your audience is expecting. When we produced it, we took the opportunity to make some changes to libretto and play it fast and loose – which seemed to work for the show.

Rags was Kris Stewart’s thesis show while studing at the West Australian Academy of Performing Arts in Perth, and the perfect thing to do in a training establishment, where we could spend a lot of time and put a lot of resources towards what is a very ambitious idea. We really tried to create a world that spoke evocatively of that moment in history – the teeming masses downtown, the new world being created around them, the oppressiveness and the hope.