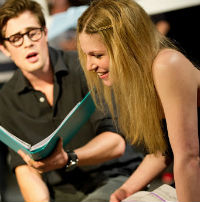 Kris Stewart is the founding director of New Musicals Australia, an initiative dedicated to the production of original music theatre in Australia. NMA aims to provide support for emerging musical theatre creators by presenting a number of workshopping opportunities to assist in the development of original work.

The program focuses on providing writers and composers with the opportunity to have their scripts and songs workshopped by professionals and presented to high level industry peers, creative industry leaders and general audience members. New Musicals Australia also supports a variety of other initiatives targeted at developing new works, establishing networks and providing support for independent writers.

Century Venues in collaboration with the Australia Council have founded this initiative and headhunted Kris to lead the organization, to help build the foundations of the shows that audiences will one day see on the Australian stages of tomorrow.

You can learn more about New Musicals Australia by visiting their website, www.newmusicals.com.au.

The Musical Snapshot.  A 20-40 minute extract of the musical will be presented in concert alongside other new works.  A panel of industry professionals will offer immediate feedback on structural and creative strengths and weaknesses. This opportunity is open to three to six new works in early stages of development and enables creative teams to receive professional feedback and gauge a general audience response.

The Developmental Reading.  A new work will be rehearsed and performed in concert.  The process will include a five day rehearsal period that culminates in a presentation of the work on the sixth day.  There will be the opportunity for two developmental readings per year for musicals in an intermediate stage of development.

The Workshop Presentation.  A musical will be rehearsed and performed book-down with staging and limited production elements.  This initiative will include a ten day workshop with professional performers and the collaboration of a director, choreographer and musical director, and will be presented to an audience of industry leaders, music theatre creative professionals and the general public.