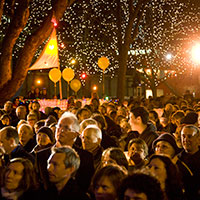 In addition to his creative practice, Kris Stewart is an experienced producer, both in the commercial and non-profit realms.

In 2010 and 2011, Kris consulted with Century Venues on a series of nonprofit projects that they were taking on, such as the Sydney Fringe (created in partnership with the City of Sydney and the City of Marrickville), New Musicals Australia (created with the Australia Council), and the Concourse, a new arts centre in the City of Willoughby where Kris consulted on programming and major events.

For more information on Kris’ work as a producer, click: