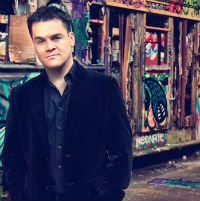 In 2010, Kris began as the inaugural Artistic Director of The Sydney Fringe, NSW’s key major event for the alternative and independent arts sector.

For the first time, iconic Sydney venues such as CarriageWorks, the Seymour Centre, the Enmore Theatre, the Factory and the New Theatre have been all brought together under the curatorship of a single festival.

At The Sydney Fringe, he has reopened The Hub and the Newtown School of Arts, both unused for decades, and made them centres for arts programming, and co-presented the Sydney Underground Film Festival, Lunamorph Alternative Fashion Festival, the Mobile Screenfest 2010 and ST2K Urban Art Festival.

For more on the Sydney Fringe, please check out the media section of this site.

“The next big thing in Sydney … a talented outsider with big ideas … a memorable spectacle in the Inner West to say the very least.” Harriet Alexander (The Sydney Morning Herald, Thursday August 19, 2010)

“Cultural smackdown (…) offering audiences ample opportunity to see the next big thing. Their work wouldn’t be seen if it wasn’t for something like this festival.” Alex Lalak (The Daily Telegraph, September 13, 2010)

“The Sydney Fringe will fill a gap in Sydney’s cultural life (…) grown from the ground up here in Newtown, it’s a vibrant part of what makes Sydney unique.” Dennis Chaplot (TimeOut Sydney, August 2010)

“An exciting, high energy, big city fringe (…) this could be one of the largest events ever seen in Sydney.” Katelyn Catanzariti (Bigpond News, Wednesday September 8, 2010)