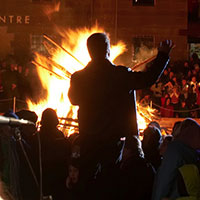 The Festival of Voices is Tasmania’s leading winter cultural event and Australia’s premier festival celebrating the vocalist and the power of song.

Kris began at the festival in 2011, and oversaw an event which had 54% increase in ticket sales with 90% of performances playing to capacity, as well as a vast increase in attendance (both free and ticketed), marketing impressions and sponsorship, with new partners including Southern Cross TV, the Mercury, the State Cinema, ArtsHub, Limelight magazine, Star Observer and Sauce magazine.

Across dozens of events and for more than 10,000 singers and audience members, The Festival of Voices showcases a range of artistic disciplines, including choir and ensemble singing, spoken word, cabaret, debate, poetry, storytelling and hiphop.

The workshop program offers learning and performance opportunities for singers of all ages, abilities and experience and since it began the Festival has attracted some of  the world’s most loved and respected vocal teachers.  The performance program covers events both intimate (such as solo vocal events) and grand (such as the the Finale Concert at the Federation Concert Hall. We also celebrate community with the Bonfire & Big Sing, with 4,000+ attendees on our heritage waterfront at Salamanca.

festival of voices articles and media:

The Festival of Voices feature from SBS television and sTVudio