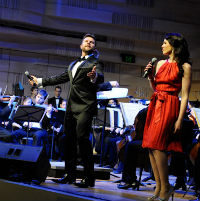 After spending eighteen months working with Century Venues on a series of non-profit ventures for the company, including The Sydney Fringe and New Musicals Australia, Kris was brought in as a consultant for the six months prior to the opening of The Concourse, an initiative of Willoughby City Council and the cultural home of the North Shore.

The Concourse is one of Sydney’s leading entertainment venues home to a dynamic range of live arts and entertainment, and it incorporates a Concert Hall and theatre as well as rehearsal and studio space, conference facilities, and outdoor urban screen and a library with over 5,000 square metres of books.