HOW TO SUCCEED IN BUSINESS 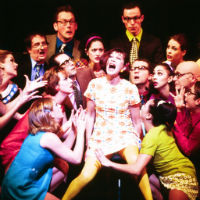 Kris directed this for the Production Company in Melbourne – they’re similar to Encores in NYC, and Australia’s only non-profit that focusses on musical theatre.

The idea was to have a lot of fun with it, playing it as one big cartoon and keeping it in period (which was defined as about 20 minutes before the sexual revolution).

It featured quite a few Australian TV stars, who enjoyed the chance to parody their personas, plus a number of Australia’s best musical theatre performers.

REVIEWS FOR HOW TO SUCCEED

“SUCCEEDS, AND HOW! This splendidly vivacious staging, the first of this year’s season of musicals from the Production Company, is directed with a fine sense of cynicism and good timing by Kris Stewart … there must have been challenges for Stewart, but he consistently surprises and uses the space to best advantage … wonderfully full realisation.” MICHAEL SHMITH (May 9, 2001), “The Age”