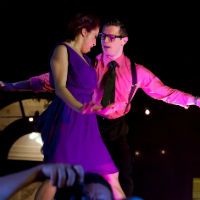 The Trocadero Dance Palace was created to be a featured event at the 2011 Sydney Festival, and is returning as part of 2012 Festival First Night.

Kris was approached by the festival artistic director Lindy Hume, who wanted to create a show about the Trocadero, which was an iconic building on George Street, Sydney from the 40’s through to the late 60’s. It was an enormous dance hall, and generations of Sydneysiders met their husbands and wives on the Trocadero dance floor.

Eventually, it fell to the inevitable tide of development in Sydney – but the show Trocadero Dance Palace that Kris created for the Festival imagined a fictional present where the Trocadero remained the centre of Sydney’s dance culture. It featured an all-female big band (which the Troc was famous for), as well as four vocalists, featured dancers, aerial artists and an enormous dance floor. It was about creating an environment, and thousands of audience members turned out in costume, a mix of cutting-edge contemporary wear and jet-age fashion. With music that swung from Christina Aguilera to Paul Anka, and the Scissor Sisters to the Andrews Sisters, it was a tremendously exciting and successful event.

ARTICLES AND REVIEWS FOR THE TROCADERO DANCE PALACE:

“70 minutes of complete and utter excitement,” the Daily Telegraph

“An unambiguous success,” Lindy Hume in the Australian newspaper