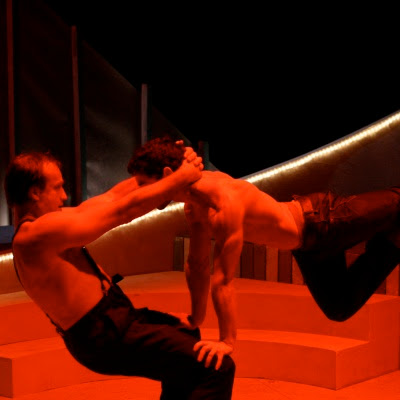 In a thrilling combination of circus and theatre, Anthony Costanzo and Peter Fitzpatrick’s Life’s A Circus is about contemporary love and timeless betrayal. It is about truth, dangerous decisions and points of no return. Kris directed the presentation of Life’s a Circus in November 2008 as part of the OzMade Musicals series for Magnormos Musical Theatre, and then directed the mainstage production in 2009 at Theatreworks.

Life’s A Circus tells a story about three performers in a touring circus show caught in a web of love, lies and deceit, but this is much more than your conventional love-triangle. It is about how love, and the need to find it, can enrich our lives but also, in a single moment, can drive us to depths of despair we never thought possible. It is a story about points of decision in individual lives, and points of no return in relationships.

REVIEWS AND MEDIA FOR LIFE’S A CIRCUS

“Compact, super-charged and tightly-packaged direction … the privilege of being present at this rare and special performance of a piece that, with more work and development, should shed its skin to become a serious contender for that constantly elusive creation: The Australian Musical.” Stage Whispers

“From its A-List musical theatre cast (Chelsea Plumley, Glenn Hogstrom and Cameron McDonald) to the elements and mystery of circus, all is performed flawlessly.” ArtsHub