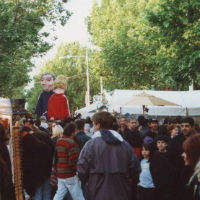 Before he left Melbourne, Kris spent 2000 and 2001 as the Producer of the Lygon Street Festa, which is Australia’s largest street event.

Celebrating the rich diversity of Italo-Australian culture, the Festa would take place over eight city blocks, with all traffic diverted and stages at each intersection and in the garden. It is a serious party atmosphere, with over 400,000 attendees, 1500 staff and artists, eight stages, and loads of activity. An enjoyable nightmare to budget, schedule, market, program and produce.