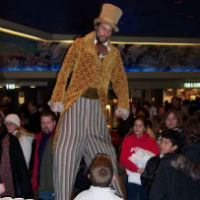 Kris’ friend Geoff Cohen was on the board of the National Music Theater Network while Kris was working as their executive director. In addition to being the NMTN treasurer, Geoff had been Executive Producer for Radio City Entertainment for a number of years.

Mr. Cohen was producing A Christmas Carol, which was written by Lynn Ahrens and Alan Menken and directed by Susan Stroman. It has a cast of 80+, and Cohen asked Kris to come in and produce a series of performances that were in the “style” of what Stroman was doing in the show, and these performances would happen in the auditorium or the foyer or suites, etc.

Radio City Entertainment hired more than 20 performers in total, and Kris developed a range of small spontaneous acts that could happen in a number of different environment. It was a bit of silliness, and fun to put together with a whole range of “specialty performers”.