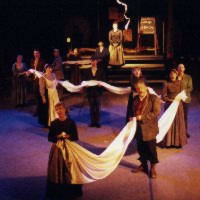 Kris directed Treemonisha for the State Opera of SA – it is a really challenging piece, and an odd selection for an Australian company. It tells a largely African-American story set in the pre-Civil War cottonfields, and was a challenging selection considering the racial make-up of the city where it was produced, which would be 95% white.

For this production, the period was shifted from the 1880’s to the time when Joplin was writing it, and the context of the opera was changed from plantation farmers to young Jewish immigrants working in a Lower East Side sweatshop, and this decision opened it up to caucasian performers, and potentially clarified the piece for a contemporary Australian audience.

“Scott Joplin’s party autobiographical Treemonisha was actually his second opera, but the only one surviving his death in 1917. Dealing with social inequalities and injustices of the American South of his childhood, it was set in an 1880’s plantation, but still has relevance a century later. This version placed the action in New York around 1907 when Joplin composed the piece, a clever decision given the difficulty of creating an authentic picture of the slave background from which Joplin sprang … managed to condense the lengthy original down to a tight hour-long one act, which preserving the essentials of the drama … rare chance to see an important work, and it showed admirable enterprise to put it on … could certainly stimulate interest in a much wider audience than can be packed into the State Opera of SA.”  TRISTRAM CARY (Sept 17, 1999), The Australian.

“State Opera has once again put together a stimulating evening of unfamiliar music theatre in its own opera theatre in Netley. A large and predominantly young cast, a handful of committed and versatile musicians and immense energy make this an evening’s entertainment that should tour the state … musical gem … a rare opportunity to see this show, and one that should not be missed.” EWART SHAW (Sept 14, 1999), The Adelaide Advertiser